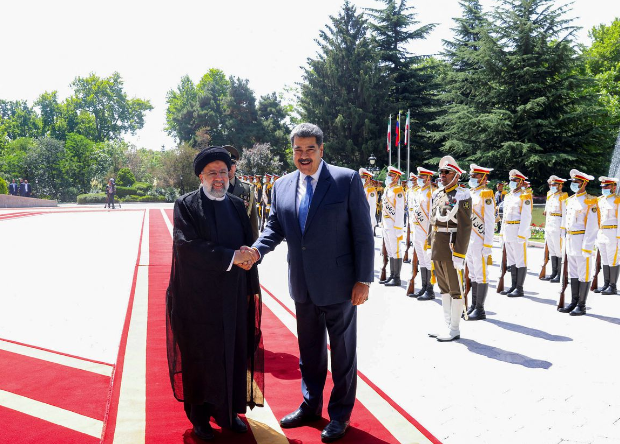 .The two oil-rich nations, hurting from US sanctions, committed to deepen bilateral relations.

The Venezuelan president visited his Iranian counterpart in Tehran’s Saadabad Palace on Saturday, a day after arriving with a high-level political and economic delegation.

In a joint briefing after their meeting, the two praised increasing bilateral relations to the “strategic” level and vowed to increase connections in commerce, energy, research and technology, agriculture, and tourism.

The two countries’ foreign ministers inked a cooperation plan in the presence of their presidents.

The representatives from both nations addressed future collaboration, while the leaders concentrated on economic cooperation under crushing sanctions.

“The Islamic Republic of Iran’s foreign policy has always been to have connections with independent countries,” Raisi remarked, sitting next to Maduro.

Like Venezuela, he said, Iran has suffered US and international sanctions for decades but has used them to advance.

No progress has been made to resurrect the historic accord that would offer sanctions relief in return for limitations on Tehran’s nuclear programme.

Raisi joined Maduro and his entourage to see Ayatollah Ali Khamenei on Saturday.

“The successful experience of the two nations has proved that the only way to overcome the US’s strong demands and hybrid war is to resist,” he told Maduro, according to his website.

Maduro commended Venezuela’s “fight against sanctions and imperialism” since 2017 and said his nation would focus future collaboration on science and technology.

Maduro proposed a direct route between Tehran and Caracas starting July 18. He hopes it would encourage more Iranians to visit Venezuelan towns and natural features.

“I think our future will be filled with strong friendships,” he remarked. “Equality, fairness, and fighting imperialism are the future of the globe.” We must construct together.”

Maduro hailed Iran’s support with Venezuela’s oil sector in an interview with HispanTV on Friday.

Following the discussions, Raisi and Maduro attended a ceremony via video connection.

in which Iran handed the second of four Aframax oil tankers bought by Venezuela.

Since 2020, Iran has helped Venezuelan refineries recover from mismanagement, poor investments, and sanctions.

Iran delivered supplies of its heavy crude to Venezuela last year to assist it increase oil and gas output to prevent fuel shortages.

“This approach might work if China and Russia join,” he told Al Jazeera.

Mousavi claimed that despite US sanctions, Iran and Venezuela will profit from economic collaboration.

It’s drafting a 20-year cooperation agreement with Russia, which Raisi mentioned in January.