Inflation in USA at its peak 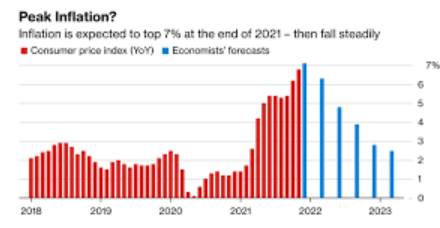 Last month, prices in the United States grew faster than projected, as rising energy and food expenses drove inflation to its highest level since 1981.

After dropping in April, the annual inflation rate climbed to 8.6% in May, according to the Labor Department.Households have been squeezed by growing living costs, placing pressure on authorities to address the problem.

Since March, the Federal Reserve of the United States has been hiking interest rates.

Analysts had hoped that the actions would begin to reduce economic activity and relieve price pressures. However, the conflict between Russia and Ukraine has exacerbated the problem by driving up the price of oil and other commodities like wheat by disrupting exports between the two countries.

However, according to Friday’s research, the price hikes are spreading throughout the economy, driving up the cost of everything from plane tickets to apparel to medical services.

“So much for the notion that inflation has reached its limit. “Consumer prices flew past forecasts – and not in a good way,” said Greg McBride, chief financial analyst at Bankrate.com. “The 8.6 percent annual gain was the fastest in more than 40 years,” he said.

“Worse, the increases were almost universal. There’s nowhere to hide.”

In May, US employers added more jobs than predicted.

The United States raises interest rates for the first time in 22 years.

Since last year, when an unexpectedly robust economic rebound from the pandemic’s shock – fueled by massive doses of US government spending, including direct cheques to households – swamped supplies, causing corporations to boost prices, the US has been battling with rising prices.

The conflict in Ukraine has now spread the problem throughout the world, with Covid-related shutdowns in China this spring playing a role.

Officials are warning that GDP in many nations is at risk of a dramatic decline as growing expenses hurt consumer purchasing power and cause a pullback in expenditure.

“Growth is being hammered by the war in Ukraine, Chinese lockdowns, supply-chain disruptions, and the prospect of stagflation.” “Recession will be difficult to avert for many nations,” World Bank President David Malpass stated this week.
Following the inflation numbers, US stock markets plummeted, with all three major indices plunging more than 2%. The drops came on top of weeks of losses in US stocks, as investors became concerned about the economy’s direction.

“When you combine ongoing supply-chain issues with the economic consequences of Russia’s invasion of Ukraine, plus the prospect of inflation, it’s easy to see why fears of a slump have increased so quickly.”

For the time being, the US labour market has continued to add employment, indicating that the economy is still growing.

However, wages have not kept up with rising prices. The rising cost of living has disproportionately impacted lower-income households, since basic necessities such as food and electricity account for a major amount of spending.

According to polls, the majority of Americans consider inflation to be the country’s most serious concern. As Republicans criticise US President Joe Biden over the problem, consumer sentiment has plummeted and his approval ratings have tumbled.

Prices rose 1% month over month, owing to the growing cost of gasoline, which has reached new highs in the United States, reaching $5 per gallon on average.

During hearings this week in Washington, US Treasury Secretary Janet Yellen stated that lowering costs was her “number one goal.”

“We must do more – and fast – to bring prices down here in the United States,” Mr Biden said in a statement.

“I’m doing everything in my power to counter Putin’s price spike and bring down the cost of gasoline and food,” Trump said later in a speech at the Los Angeles Port.

“For the time being, the US economy is in good shape, as seen by the high demand for almost everything, including goods and services.” “However, the Fed must address the issue,” he said.

“The outcome will be a significant downturn in the US economy in the coming quarters, triggered in large part by the Fed.”